The free and open-source web browser, Brave has been criticized over its move of adding a new exchange widget for Bitcoin.com. Users were complaining that this newly-added Bitcoin.com exchange widget was offering an option for purchasing Bitcoin Cash (BCH) by default. When users noticed it, they started criticizing the Brave Browser.

One of the Twitter users said that he is really a big fan of Brave Browser but he was not pleased to see this integration of Brave with Bitcoin.com. He said that it was misleading users to purchase the fifth-ranked digital currency Bitcoin Cash (BCH), not Bitcoin (BTC). The Twitter user said:

“I am a huge fan of Brave Browser but i am really pissed to see an integration of bitcoin(dot)com which is intentionally misleading people to buy Bitcoin Cash instead of real #Bitcoin !!!” 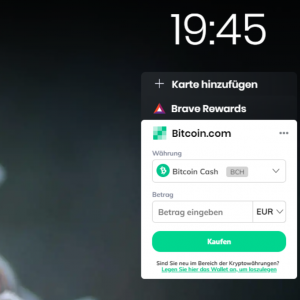 However, in order to give a response to this criticism, the Senior Developer Relations at Brave Jonathan Sampson took to Twitter and replied to the tweet of the user. In his reply, he said that it is easy to hide the widget that you do not want to see saying, “you can hide the widget with 2 clicks; start by clicking … at the top-right of the widget. Not all widgets will appeal to all users.”

Sampson said that he completely agrees with the point raised by the twitter user but there are some users who are already using Bitcoin.com for buying or selling their digital assets and like its service. And then there are those users who have a love for Bitcoin Cash (BCH) and love to trade with it. He stated:

“Users who already buy/sell/trade on bitcoin.com, this offers a more secure way of doing so… The reality is that a lot of people love BCH, and the bitcoin.com service. We want these people to be safe, and secure when they’re using Brave. For this reason, a widget helps to protect their transactions.”

Another twitter user known as RcBerndt said that he does not think that the Bitcoin.com website is misleading people saying that the name of Bitcoin Cash is clearly mentioned over there in the widget.