After the United States federal agency Commodity Futures Trading Commission (CFTC) charged BitMEX for illegal trading, a large number of Bitcoin has been moved out from the cryptocurrency exchange so far. According to data from Glassnode, more than 32,200 Bitcoins (BTC) have been withdrawn from the exchange.

BTC worth around $337 Million were moved

The amount of Bitcoin that has been withdrawn from the BitMEX exchange is worth $337 million. And, according to the estimated data of Glassnode, this amount is almost 19% of the total funds of the exchange. Initially, 23,200 BTC worth more than $240 million was moved out from the exchange in the first batch in early hours. According to Glassnode, this has been regarded as the largest Bitcoin hourly outflow from the derivative exchange BitMEX.

In the next few hours, these transfers got increased and 19 percent of the total stored Bitcoins were withdrawn by cryptocurrency traders. 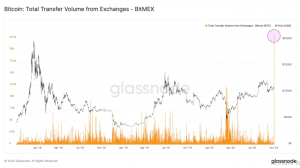 The latest withdrawals included 6,000 BTC worth approximately $63 million and 2,900 BTC. Hence, the total amount was moved in three batches. Likely, all of these BTC have been transferred into some other cryptocurrency exchanges.

Moreover, the cryptocurrency derivatives research company Skew has shared data according to which the BitMEX trading platform has also witnessed a decrease in Bitcoin perpetual open positions which dropped to $462 million from $592 million. This is a drop of approximately 22%.

This major outflow has occurred in a wake of the recent filing in which the CFTC had sued BitMEX owners and operators on Thursday charging them with operating an illegal trading platform.

CFTC said in an official press release that BitMEX was “operating a facility for the trading or processing of swaps without having CFTC approval as a designated contract market or swap execution facility, and operating as a futures commission merchant by soliciting orders for and accepting bitcoin to margin digital asset derivatives transactions, and by acting as a counterparty to leveraged retail commodity transactions.”

However, BitMEX said in response to these charges that they disagree with these allegations and they will fight against these charges. The company also claimed that its trading platform will continue to operate.