The decentralized finance (DeFi) hype has already been on the track to cool down over recent time and a recent hacking attack has brought more downfall for the industry. One of the rising decentralized finance yield farming protocols was hit hard by hackers earlier today on Monday. As per some reports, Hackers attacked the DeFi protocol Harvest Finance and exploited around $24 million worth of USDT and USDC stablecoins. And surprisingly, they sent $2.5 million worth of funds back to the deployer. Following the Harvest Finance exploit, the total value locked in the decentralized finance protocols has plunged down significantly.

Recently, DeFi’s total value locked (TVL) reached a new high of $12.5 billion on October 24. But now it has moved down to approximately $11.5 billion, according to the data from DeFi Pulse. 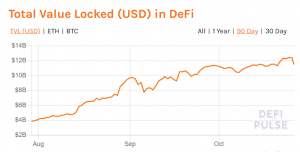 This decrease in the decentralized finance’s total locked value has occurred suddenly within the duration of no time after reports came on the front that Harvest Finance has been attacked by hackers and has lost $24 million in value. Due to this hack, the total locked value of this DeFi protocol fell from its peak value of $1 billion to $540 million around where it is residing at the moment. As a result, the entire TVL in DeFi witnessed a potential drop which lost more than $1 billion in total locked value.

By crossing above $1 billion in total value locked, the yield farming platform Harvest Finance was successfully holding the sixth spot on the list of top ten DeFi protocols. However, the massive drop has sent the protocol down to the eighth spot now.

Moreover, the hacking incident has also affected negatively the price value of the native token of Harvest Finance FARM. After facing a potential drop of approximately 65 percent, early on today, the token continues to trade in the bearish zone. Though the coin showed slight recovery by rising from $85 to $124, the bearish sentiments are still revolving around the token. The price value of FARM is still down over 52 percent while standing at around $107.