The decentralized storage network Filecoin that recently launched its mainnet on October 15 has been hit hard by Justin Sun, the Founder and Chief Executive Officer (CEO) of the digital currency platform Tron (TRON). Justin Sun attacked the Filecoin project in a tweet saying that it is an “exit scam”.

Is Filecoin an Exit Scam?

Justin Sun appeared on Twitter on the 16th of October and attacked the decentralized storage network Filecoin. He said in the tweet that an amount of $1.5 million worth of FIL tokens was sold at a price of $200 saying that the developers of the Filecoin project have employed an “exit scam strategy” for selling this amount of FIL tokens. This is what he said in the tweet:

In order to support his claim, he posted a screenshot in the tweet. The screenshot showed that the founder of Filecoin received an amount of $1.5 million worth of FIL on the 15th of October the day when the decentralized storage network rolled out its mainnet launch. 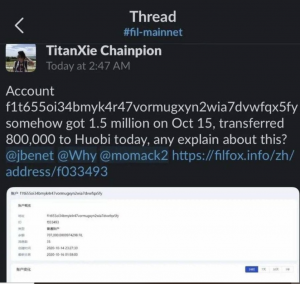 Moreover, the screenshot shared by TRON CEO revealed that from the account of the Filecoin founder, an amount of 800,000 FIL tokens were moved to the major cryptocurrency exchange Huobi after that. Justin Sun considers it the basic reason behind the price drop of FIL.

These remarks from the Founder of TRON have come one day after the Filecoin network launched its mainnet. However, no statement has come so far from Filecoin in response to these remarks of Justin Sun.

FIL is continuously being listed by major crypto exchanges