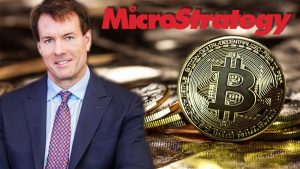 The top digital asset Bitcoin (BTC) continues to rally higher and skyrocketed to $13,850 earlier today. As Bitcoin is going up, the business intelligence firm MicroStrategy is planning on adding more BTC into its existing massive stash of Bitcoin. The firm has already witnessed a huge profit from buying Bitcoin.

Phong Li, the President and Chief Financial Officer (CFO) has revealed the firm’s plans to purchase more Bitcoin after it recorded the highest total revenue in the third quarter of 2020. Li said that the firm has not only gained a return of 22 percent on its investment in Bitcoin but there are some other notable benefits that the company gained through their Bitcoin investments. “This is benefitting our reputation overall, raising our mindshare among prospective customers,” he added.

Because of this, Li said that they might be looking for purchasing more Bitcoin to increase their Bitcoin stash. These remarks came from Phong Li during the firm’s Q3 earnings call.

This profit is more than the total revenue that the firm saw from its business operations during the last three years which stands at $78 million, as per the data shared by Kevin Rooke, a cryptocurrency researcher.

MicroStrategy made its first investment in the top-ranked digital currency Bitcoin in the month of August when it bought an amount of 21,454 BTC for $250 million. While on the other hand, the second investment was made in September in which the firm invested $175 million to purchase more 16,796 BTC. At the price of BTC at $13,745, the value of these BTC holdings in total reached $525 million.

When the firm invested in Bitcoin, it regarded the leading digital coin as its “primary treasury reserve asset”.