Since the launch of the first-ever decentralized digital currency Bitcoin (BTC) in the year 2009, the top-ranked cryptocurrency’s price value has only stayed for 93 days above the key price level of $11,500, new historical data shows. Initially, in its beginning days after the launch, Bitcoin’s price traded fairly at a very low level. However, after that, it started grabbing the attention of the community and quickly gained traction. In Dec 2017, Bitcoin recorded its all-time value at around $20k.However, it has not been able to break above its all-time high value so far.

Skew, the famous cryptocurrency and blockchain analytics firm has shared new data which shows that the largest cryptocurrency in the world by market cap Bitcoin has only spent 93 days so far above the $11,500 price level since the day of its launch. This key level is far away from the coin’s all-time high value. 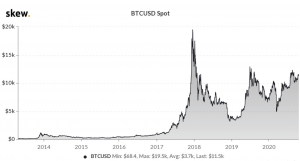 Currently, the price value of Bitcoin (BTC) is holding above the $11,500 as well. As per the data from CoinMarketCap (CMC), the price of Bitcoin is changing hands at around $11,700 with a change rate of over 2 percent in 24 hours. The number of days might increase if Bitcoin stays above this key level in the coming days. The current bullish behavior of the major digital coin shows that it will be moving in an upward direction in the next few days.

As Bitcoin’s price value has once again started rising high towards its past resistance level of $12,000, Bitcoin has also witnessed a significant increase in its number of address holding more than 100 coins. According to the latest data shared by the blockchain analytics company Glassnode, the Bitcoin number of wallet addresses containing over 100 BTC has reached to a new six-month high.