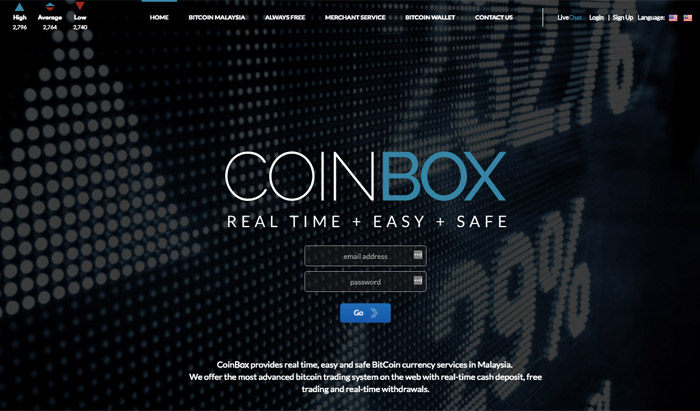 Nowadays, the word “cryptocurrency” is no new word especially to the internet user who uses digital currency to perform online transactions. The most important feature of cryptocurrency is the fact that it cannot be manipulated by anyone or any government as it is an independent currency which is not subject to government intervention or manipulation. Also, because if the use of cryptography in its security, cryptocurrencies are very secure and provide users with privacy and anonymity. Some cryptocurrencies are Bitcoin, Litecoin, Dogecoin, Zcash and many more.

However, to be able to use these cryptocurrencies, users need a platform through which they can make and process their transactions with ease and reliability. This is where systems such as the Coinbox Malaysia come in. The Coinbox Malaysia is a system which was founded by several companies as a means to help Malaysians interested in using Bitcoins as it was noticed that while most countries including the NYSE use bitcoins, there was no single company in Malaysia that use the bitcoin. Thus, several companies funded and created the Coinbox Malaysia not only as a means of helping Malaysians get the Bitcoin but also as a means of providing Malaysia with tax income as it gives Malaysians the chance to buy and sell Bitcoins in their own marketplace.

A very exciting and important feature of the Coinbox Malaysia is the fact that there is no charge on transactions. Users of Coinbox Malaysia can buy and sell bitcoin free of charge without any terms or conditions. In addition to the fact that Coinbox Malaysia is free of charge, the system has been developed to detect and monitor user behavior and block any suspicious attempts to login to any users’ account thus making the Coinbox Malaysia a very safe and secure place to your money and bitcoins. In addition to the automatic detection and blockage of suspicious behavior on user accounts, it also uses a two-factor authentication security layer for members without any cost. It is also very private and anonymous as it does not save or share customers’ information and credentials. Instead, such information is converted and replaced by encryption tokens which use advanced algorithms and security to ensure privacy, anonymity and safety of members. As such, the Coinbox Malaysia is the largest bitcoin market in Malaysia.

CoinBox Malaysia does not only provide an easy and safe way of buying and selling bitcoins but it also provides a platform where buyers and sellers can meet and discuss, and also provides real time currency services and support every hour of every day in Malaysia. It is a system designed to handle millions of transactions in a matter of seconds. Developers of the Coinbox boast of its ability to mimic the same standards used by the NASDAQ stock exchange market which give traders and users real-time trading without any delays.

The Coinbox Malaysia also offer users the chance to use the Coinbox Off-chain Wallet through which users can send and receive bitcoins instantly without any setup, transaction or hidden fees. It uses the 256-bit encryption which is very advanced and has high security standards. In addition, user and other data is very safe as Coinbox infrastructures and systems are audited on a daily basis, making sure that safety standards are kept at high standards. Your data is safe. Coinbox audited daily in compliance with PCI DSS standards.

An additional feature of the Coinbox is in its device friendly nature. The Coinbox can be accessed on any device be it a laptop, desktop or mobile device and it is easy to customize such that users do not lose any bitcoins due to inaccessibility.

Conclusively, the Coinbox Malaysia can be summarized as the perfect combination of speed, security and technology and it can be termed the most reliable bitcoin platform in South East Asia. Its ease of creation and use together with its cutting-edge technological features and state-of-the-art security make it the perfect platform for users of bitcoin across all of Asia and probably the world.